I am often puzzled by the fact that even some of my long-time students are confused about the meaning of relaxation. In general, to be relaxed in I-chuan training does not mean to be inactive. The notion of inaction implies not doing anything either mentally or physically. By contrast, the very heart of I-chuan training is the mental and physical activity of hard work. Consequently, any interpretation of the notion of relaxation that confuses it with inactivity is fundamentally misguided. The difficulty, however, is that, by its very nature, work creates tension, and tension always hinders one’s training. Paradoxically, then,the student must learn to work hard and simultaneously to let go of the tension created by that work. test. test
Download Full PDF

Who doesn’t know how to stand? But standing the right way is a lot more mentally and physically challenging than people generally think. Students who do not train correctly in I-chuan learn well how to stand the wrong way, and they pay a high price for their diligence; after years of bad training, these students ultimately have more health problems and less energy than when they began. I would like in this paper to clear up some common misunderstandings and confusions about the art of standing (Zhan Zhuang) and to lay out some basic principals of proper training from the perspective of I-chuan.

I want to emphasize at the outset that because no two people ever perform t’ai chi chuan in the same way, the student must regard the training as an evolving practice and a long journey of self discovery. One must learn above all to put one’s individuality into all that one does in training. In this context as elsewhere, the thought that one size ?ts all is a great stumbling block to one’s development. That said, it is worth mentioning by way of introduction to t’ai chi chuan some of what are generally considered to be the bene?ts of regular practice.
Download Full PDF

“I would much rather a student learn how not to do something wrong than that he or she learn to do the wrong thing well. And because there is always further support that can be added to a person’s movement, training in this way is the task of a lifetime.”
Download Full PDF

If a natural responsiveness of the whole body and mind to the concrete demands of a situation is the aim of Yiquan training, how are we to think of the means by which that aim is to be achieved? Any method, it seems, would lead only to an artificial result, and that is why Yiquan eschews the use of elaborate forms and techniques. How, then, does this form of training develop the sought-after responsiveness? What, in particular, does Yiquan standing contribute? In this paper, the author explains how by picturing oneself engaged while standing in different sorts of very simple bodily actions, one can naturally recover the kinds of lost or distorted neuromuscular connections responsible for natural responsiveness. Such picturing, however, must be clearly distinguished from merely imagining oneself doing certain things. In Yiquan, the use of pictures corresponds to the formation of a real intention to do something, and such intentions are always expressed in the body as muscular work.

Classical writing about Chinese martial arts is frequently poetical and highly abstract in nature. While often inspiring, such writing can be difficult for even the most willing student to apply to his or her training in real life. In this paper, therefore, I address – in a question and answer format – a number of practical issues about i-chuan that arise in the course of training. I ask and propose answers to the following sorts of questions: When should one train? How long and low should one stand? What is the relationship between health stance and combat stance? How to know if one’s training is improving? What to look for in a teacher? How to train in one’s middle age? How to address knee and back problems in the context of i-chuan standing? How does i-chuan contribute to other forms of martial arts training? What are the benefits of i-chuan training for fighting? What is the relationship between i-chuan standing and the other components of i-chuan training like test of power and push hands? And so forth. In my teaching, I emphasize the importance of hard work. My hope is that a down-to-each, practical approach to the questions I discuss here will help the reader train intelligently as well.

One’s understanding of the goals of I-Chuan training should develop and deepen over time. Such progress is possible, however, only if one has an initial idea of the aims of training. As I have emphasized elsewhere, without a conception – however sketchy – of those aims, one’s training can easily begin to drift without direction. I would like in the following remarks to touch on what I consider six basic elements of correct standing practice. The student must learn to:1. Balance his or her skeletal support
2. Balance his or her muscular activity
3. Increase his or her muscular output
4. Coordinate the mental, muscular, and skeletal aspects of movement
5. Learn to use “I” (mind/intention) in breathing and muscular coordination
6. Balance sung and gian (i.e., learn to work without creating tension) in both mind and body
This paper examines these points in the order presented. I describe how one should begin to master these six basic elements of I-Chuan standing. Along the way, I point out some common misconceptions about training and provide concrete illustrations of correct practice.

The name “test of power” can misleadingly suggest that the practice is meant to test the power or speed of one’s movements. On the contrary, test of power aims instead at refining the preparation for movement. As I have indicated elsewhere, any emptiness in your movement at the outset will haunt that movement until its completion. For example, if you have not right at the beginning engaged the muscles in your torso to support an arm movement, that support cannot be added as you go. A movement that is empty at its commencement will be empty at the end. In test of power, then, we are learning to look for emptiness at the start of a movement. Of course, you may find only once your movement (e. g., a punch or a step) is completed that it was empty. Inevitably, however, the emptiness you find at the end of a movement was there at the start. In this paper, I consider some basic questions one should ask oneself when practicing test of power. These questions are meant to be practical in the sense that only one’s test of power can answer them. They cannot be addressed in the abstract. Only test of power itself can answer them, and if the answers are not clear, one’s practice is not clear.

“From a traditional Chinese perspective, our contemporary attempts to heal the body without healing the mind or to train the mind without strengthening the body are equally futile. Centuries ago, Chinese sages developed an approach to mental and physical health that develops the mind by training the body and trains the mind by developing the body that is appropriate for all individuals regardless of their age or overall condition at the outset. With proper instruction, anyone can learn in a short period of time how steadily to improve his or her mental and physical health by means of a simple and direct practice that requires no special equipment and that can be practiced anywhere and as often and for as long as one likes. The heart of this approach is what I am calling, “Standing Practice…”

“… the purpose of combat stance is constantly to increase one’s mental and physical power.”

The Spirit Of Investigation

“Pictures like that of a flag blowing in the wind, of a fish swimming in the waves, of cock fighting, of the body on fire, and so on were all meant to stimulate the student’s nervous system. They were not meant to be the foundation of new martial arts forms. The basic idea behind each picture is always the same: the student must learn how to ‘do the real thing without the real thing.’”

Up Down Training The Key To I-Chuan Six Powers

“What I have said about sitting on a three-legged stool is true for all of I-chuan training. To train your mind and body always to be in the stage of just standing up from a collapsing chair, or of touching a hot stove, or of doing a 100 yard dash is the heart of standing, test of power, push-hands, and free sparring.”

Meaning of Relaxation: Inside & Outside I-Chuan Training

“By contrast, the very heart of I-chuan training is the mental and physical activity of hard work. Consequently, any interpretation of the notion of relaxation that confuses it with inactivity is fundamentally misguided.”

Walking: An Introduction to Some Basics

“There is little chance that any formal technique…is ever going to be as natural as the informal “technique” of walking you have been practicing all your life.”

“Art of any sort demands more than just blind obedience and a good memory; it demands that one make the teaching one’s own. 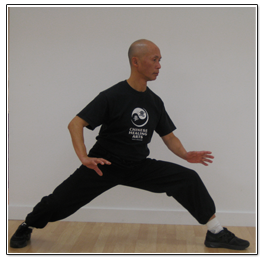 Gregory Fong was born in the city of Guangzhou in mainland China, and raised in Hong Kong. He spent five years during the mid-1960s learning Wu style Taijiquan.

Read more ›
My Aim of TeachingAll agree that the aim of the traditional energy arts from China is to develop radiant health and energy, to balance mind and body, and to encourage a harmonious relationship with one’s environment. The student training in these disciplines – for example, in /t’ai chi/, /bagua/, or /qigong/ – aims above all to cultivate his or her /Qi/ in such a way as to promote robust vitality and vibrant mental and physical good health. But these goals and the means to achieve them can be difficult to understand, and even the most sincere and dedicated student can easily go astray. Read More >